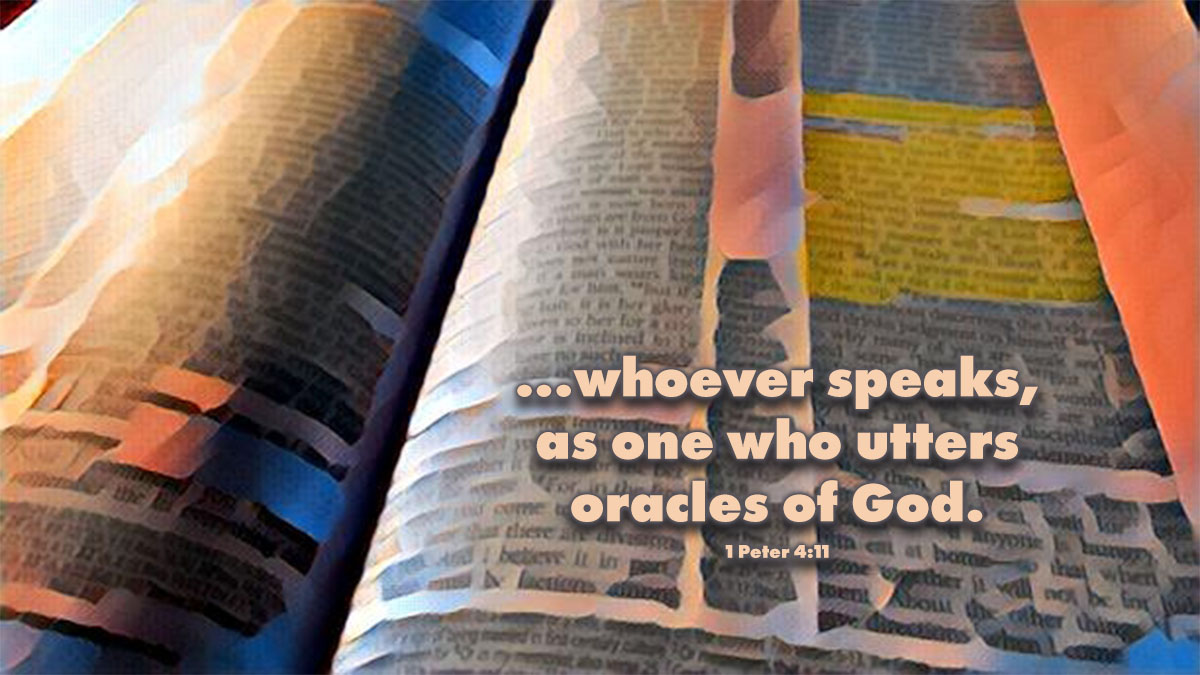 10 As each has received a gift, employ it for one another, as good stewards of God’s varied grace: 11 whoever speaks, as one who utters oracles of God; whoever renders service, as one who renders it by the strength which God supplies; in order that in everything God may be glorified through Jesus Christ. To him belong glory and dominion for ever and ever. Amen.

It is necessary that both preachers and hearers take heed to doctrine and have clear, unmistakable evidence that what they embrace is really the true Word of God revealed from heaven; the doctrine given to the holy and primitive fathers, prophets and apostles; the doctrine Christ himself confirmed and commanded to be taught. We are not permitted to employ the teachings dictated by any man’s pleasure or fancy. We are not allowed to adapt the Word to mere human knowledge and reason. We are not to trifle with the Scriptures, to juggle with the Word of God, as if it would admit of being explained to suit the people; of being twisted, distended and patched to effect peace and agreement among men. There would then be no sure, permanent foundation whereon the conscience might rely.

Still it is not enough that the office and commandment be God-appointed. We ministers should be conscious—and the people should be taught—that efficacy of office is not of human effort, but is God’s power and work. That which the office was designed to accomplish is not effective by virtue of our speech or action, but by virtue of God’s commandment and appointment. He it is who orders; and himself will effectively operate through that office which is obedient to his command. In baptism, the Lord’s Supper and absolution we are not to be concerned about the person administering the sacraments or pronouncing absolution,—who he is, how righteous, how holy, how worthy. Worthiness or unworthiness of either administering or receiving hand effects nothing; all the virtue lies in God’s command and ordinance.

The motive for all Christian effort is named in the words, “that in all things God may be glorified.” No one may seek or ascribe to himself power and honor because of his office or gifts. Power and glory belongs only to God. God himself calls his Church, rules, sanctifies and preserves it through his Word and his Spirit. To this end he bestows on us his gifts. All is done purely of grace, wholly for the sake of his beloved Son, Christ the Lord. Therefore, in return for the favor and ineffable goodness bestowed upon us regardless of our merits, we ought to thank and praise God, directing all our efforts to the recognition and glory of his name.

Luther, Martin, and John Sander. Devotional Readings from Luther’s Works for Every Day of the Year. Augustana Book Concern, 1915, pp. 143–44.